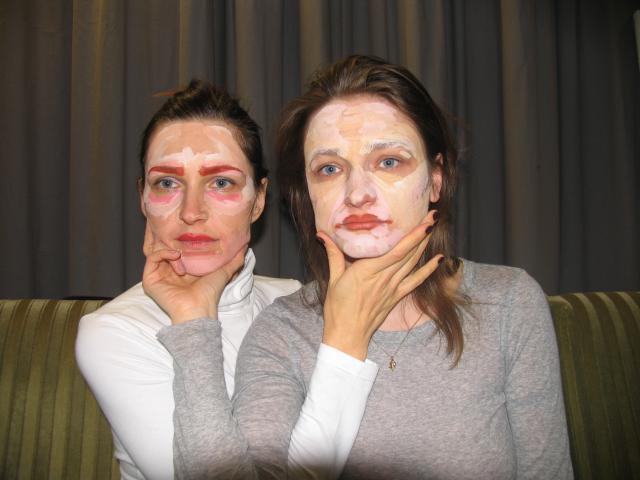 Anetta Mona Chişa and Lucia Tkáčová met during their studies at the Academy of Fine Arts and Design in Bratislava where Chişa studied sculpture (with Juraj Bartusz) and later painting (with Daniel Fischer) while Tkáčová attended Rudolfa Sikora’s Open Studio. They have been working as an artistic duo since 2000, while also being active in the art scene individually. Apart from their creative endeavors, they also curate and write about art. Their artwork sun cover immanent and often overlooked practices of capitalism, patriarchy, and the way the artistic society works, and subject them to original criticism. The works are conceptual and take on a wide range of forms – from video performances involving the artists themselves tophotography, collage, work with text, found and produced objects, installations and involvement of volunteers in generously conceived performances and events. They are interested in the way symbols and images (such as the clenched fist as a symbol of revolution) work, and language, which they paradoxically employ to liberate themselves from the pitfalls it itself poses. Chişa and Tkáčová became the first artistic duo to win the Oskár Čepan Awardin year 2006. The exhibition took place at the Medium Gallery in Bratislava and the other finalists were Lucia Dovičáková, Stano Masár and Ildikó Pálová.