Catalog of the finalists exhibition of the Oscar Čepan Award 2019 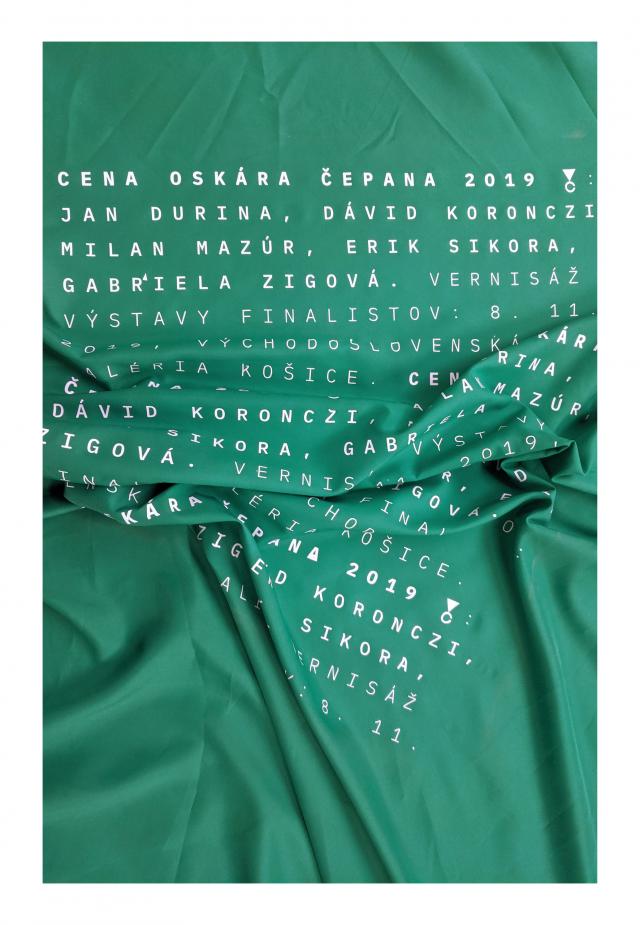 Foundation – Center for Contemporary Arts has a pleasure to invite you to the opening of the exhibition of finalists and the official announcement of the winner of the Oskár Čepan Award 2019.

The high quality of the applicants and their diversity constituted a real—but at the same time wonderful—challenge for the jury. The different positions and positioning of the artists in terms of media, art practice, discourse and output created conditions for a strong dialogue between the international and the local development of art practice, characterized by a dynamic energy that made the selection process difficult. Through the academic or the activist approach, the artists tackle themes as broad as national and gender identities, political and personal borders and the current relationship of humans with the environment. Developing humour, melancholia and a modern grandeur, the questioning and challenging approach of the finalists uses research, theory, fresh media and styles to combine them into new exciting perspectives. In addition, nature as a metaphor of society enables the artists to articulate the role of the body, which is natural and self-confirming. The diversity of styles—ranging from the formally perfect and beautiful ones to the casual ones—represents a vital definition of the current art scene in Slovakia.

Rainer Fuchs /AT/ is the deputy director, leading curator and head of the research department of Museum Moderner Kunst Stiftung Ludwig—mumok—in Vienna, where he also gives lectures at the Academy of Fine Arts. He focuses on Austrian and international modern and contemporary art in the context of cultural anthropology.

Bartholomew Ryan /USA/ is an independent curator who lives and works in Minneapolis (USA). He worked as the Milton Fine Curator at the Andy Warhol Museum in Pittsburgh and as an Assistant Curator at the Walker Art Center in Minneapolis, where he co-curated an ambitious historical exhibition project International Pop (2015).

Lora Sariaslan /NL/ is an art historian and curator who worked at the Dallas Museum of Art (2001-2005) and was curator at Istanbul Modern (2005-2011). She is a lecturer at the University of Amsterdam. She is a member of AICA Turkey and the Turkish National Correspondent for the European Museum Forum (EMF).

Jaro Varga /SK/ is an artist and curator. In 2018, he realized art projects in Paris, New York, Seoul, Brussels and London. Between 2007 and 2019 he ran HIT Gallery in Bratislava. Between 2015 and 2017, he worked as the chief curator of the MeetFactory Gallery in Prague. Within the whole spectrum of his activities, he primarily focuses on the topic of the expanded role of the artist and art.