Who is Oskar Cepan Award

→ statement from the finalists

Finalists of The Oskar Čepan Award 2017

Announcement of the Finalists 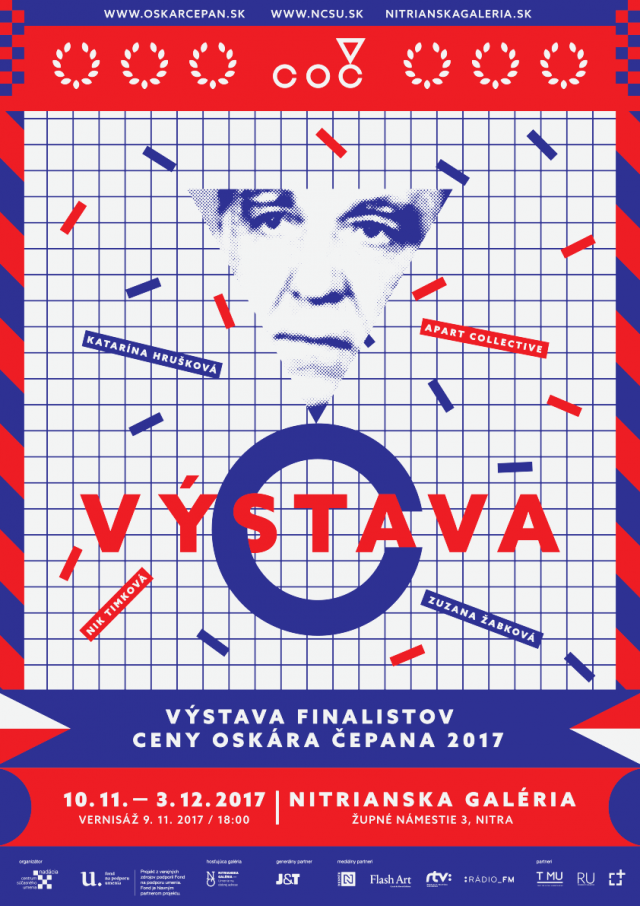 Foundation – Center for Contemporary Arts has a pleasure to invite you to the opening of the exhibition of finalists and the official announcement of the winner of the Oskár Čepan Award 2017.

APART collective, Katarína Hrušková, Nik Timková and Zuzana Žabková are finalists of 22nd editio of Oskár Čepan Award, an award designed for visual artists living or being active in Slovakia, up to 40 years old. Finalists were nominated by an international jury of Kiki Petratou (GR/NL), Lilly Hall (UK), Dorota Kenderová (SK), Barnabás Bencsik (HU) and Michal Novotný (CR). The laureate selection will be based on the artworks that finalists create uniquely for the exhibition in Nitra Gallery. The laureate will receive 2 600 EUR and will be sent to Residency Unlimited in New York for two months-long residency networking program.

Oskár Čepan Award is organised by The Foundation – Centre for contemporary art and financially supported from public sources by Slovak Arts Council who is the main partner of the project.

APART collective, Katarína Hrušková, Nik Timková, Zuzana Žabková. In the year 2017, the preparation of the finalists’ exhibition took a unique turn: the artists made an agreement not to try to win the award individually but rather create a presentation that would function as their collaborative artwork. At the same time, they published a statement wherein they criticized the cultural status quo in Slovakia, the institution of the Oskár Čepan Award, and especially the principle of competition as such. Instead, they declared allegiance to the principles of dialog and cooperation. The decision caused a ripple in media and eventually contributed to changes in the way the Award is organized. The jury acknowledged the unexpected turn of events and declared all finalists as winners. APART collective (Denis Kozerawski – 1990; Magda Scheryová – 1990; Peter Sit – 1991; Andrej Žabkay – 1987) is an artist collective founded in 2012. Its members focus on publishing, curation of exhibitions, organizing of visual art projects, lectures, and their own artistic oeuvres (both as a collective and as individuals, often in collaboration with other artistic subjects). Katarína Hrušková (1984) works with photography, video, text, sound, and spoken word. Thematically, she addresses mundane, often overlooked objects and situations, using them to represent the need for a comfort zone and, at the same time, efforts made to move out of it. Nik Timková (1986), a multimedia artist and organizer, focuses mostly on creation of objects and installations made from various materials (textile fabrics, ceramics), but also digital art. She investigates topics like corporeality, materialism, and the problems of the millennial generation. Zuzana Žabková (1987) studied visual arts as well as dance and choreography, which determines her specific contribution to the art scene. Her oeuvre combines dance, video art, performance, work with text, and installations.