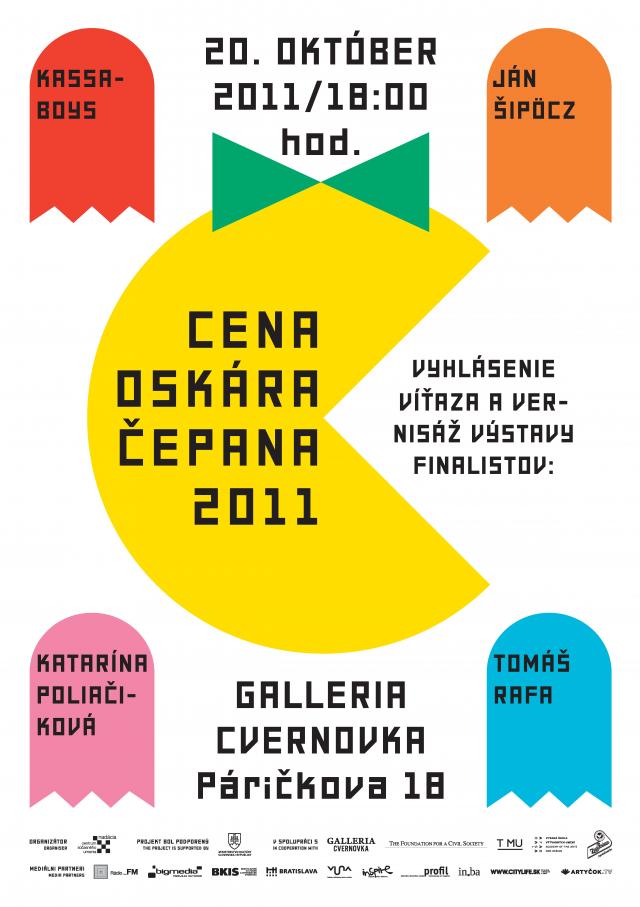 Foundation – Center for Contemporary Arts has a pleasure to invite you to the opening of the exhibition of finalists and the official announcement of the winner of the Oskár Čepan Award 2011.

The jury of the Oskár Čepan Award for Slovak contemporary art announces the finalists for this year’s prize. The applicants selected for the next round of the 2011 competition are Kassaboys, Katarina Poliačiková, Tomáš Rafa and Ján Šipöcz. The international jury, which met on 9 June 2011, was impressed by the breadth of artistic approaches and methodologies demonstrated by this year’s applicants. Many of the 47 artists who entered the competition deal in their practice with relevant contemporary issues, from gender to nationalism and the politics of memory, or engage with expanding the borders of specific media, working with a diverse range of artistic techniques from animation to public art and painting to architectural interventions. After much deliberation, the jury was able to reach agreement around the following four artists and artist groups, which are selected as the finalists of the Oskár Čepan Award 2011.

Each of the selected artists will be invited to produce new work for an exhibition of the finalists of the Oskár Čepan Award 2011 on the basis of which the jury will choose the winner of this year’s prize. The prize consists of an award of 2 600 euro, a six week artist residency in New York, and a solo show in the Slovak National Gallery. The winner of the Oskár Čepan Award 2011 will be announced on 20 October 2011 at the opening of the exhibition of this year’s finalists.

The jury members of the Oskár Čepan Award 2011-12 are Edit András, Fedor Blaščak, Maja Fowkes, Reuben Fowkes, Gábor Hushegyi and Ondřej Chrobák. The Oskár Čepan Award is part of the YVAA network of young artist awards in Central Europe and is organised by the Centre for Contemporary Arts Bratislava.

The Košice-based trio of young artists, Kassaboys (Radovan Čerevka – 1980, Tomáš Makara – 1982, Peter Vrábeľ – 1982), resists the centrifugal tendencies in the Slovak art world, deploying irony and satire to mock the complacency and phraseology of the art establishment. The majority of the jury was impressed by the combination of intelligence and rebelliousness found in their work on national symbols and their use of uniforms to expose hierarchies in the art world.

The thoughtful and visually compelling installations of Katarina Poliačiková (1982), a graduate of the Academy of Arts in Bratislava, made a strong impression on the jury members. Her artistic research into family history investigates the passing of time and the singularity of lived experience translated into sculptural installation, with eloquent reference to prominent figures from art history.

The films of Tomáš Rafa (1979) inhabit the highly-charged territory between contemporary art, grassroots documentary and political activism, recently charting the rolling struggle between rightwing extremists and anti-fascist demonstrators in the public spaces of East European cities. The jury admired the concision, commitment and distinctive grammar of his filmmaking.

Ján Šipöcz’s (1983) approach to photography is firmly anchored in the methodologies of conceptual art. Working with discarded prints from an ordinary photo lab, and preferring the physical intervention of cutting and reframing to the manipulation of digital images, his series of clipped portraits impressed the jury with their light touch and dematerialised aesthetic.