Finalists of The Oskar Čepan Award 2004

The winner is Michal Moravčík 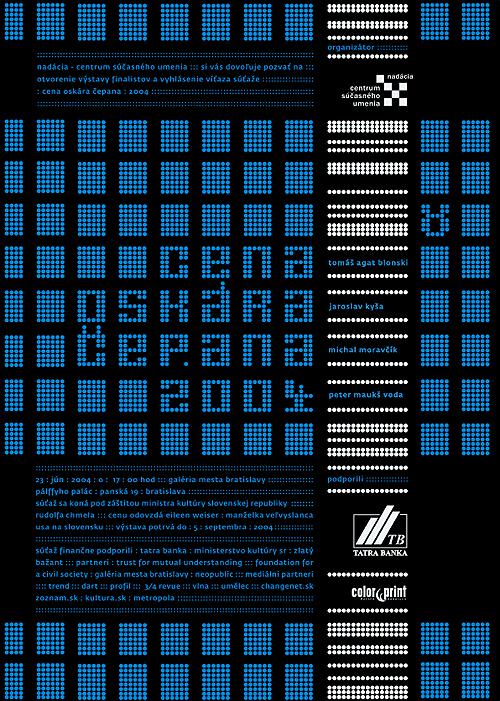 Foundation – Center for Contemporary Arts has a pleasure to invite you to the opening of the exhibition of finalists and the official announcement of the winner of the Oskár Čepan Award 2004.

The competition is held under the auspices of the Minister of Culture of the Slovak Republic Rudolf Chmel.

The Award will be presented by Eileen Weiser, wife of the USA Ambassador to Slovakia.

The competition is supported by Tatra banka, The Ministry of Culture of the Slovak Republic.

- Extraordinarily consistent artistic exploitation of the current corporate and advertising pseudo-culture, and its systematic emptying by the weapons of its own; noteless smuggling of the art (i.e. bizarre objects with mimikri of the irreplaceable assistants from Baumax) in the public and commercial sphere; and his highly professional catalogue distribution (worked around by the Maukš Voda company).

- Development of the conceptual and performative potential of photography, while adhering to the traditional genres and often even archaic technical parameters of this media (use of mini-camera Agát); enrichment of creative potential of the photo-portrait (the series of baleful portraits of chickens above lie size), as well as revival of the photo-report genre through a diptych programmed directly in the camera.

- Inventive development of an artistic tradition in plastic arts of new figuration through an active incorporation of figurative sculpture as an object in the installation and environment; nostalgic furniture objects referring to the socialistic design of the 1970s as well as his latest collection of ready-mades, which focus on both topical and retarding political, historical, and societal issues.

- Sensitive reflection of political, moral, and aesthetic aspects of the current reality by topical artistic forms; the series of works that are humorously concerning issues of war, terrorism and their visual representation; video-works created on the basis of his own performances, which are ironical about symbolism of an integrated Europe, globalization as well as current Euro-mania.