The winner is András Cséfalvay 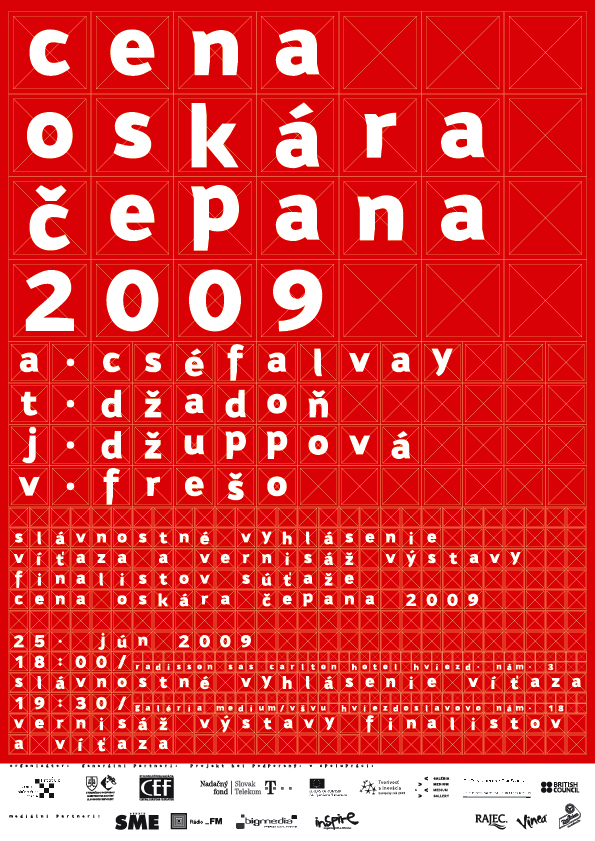 Foundation – Center for Contemporary Arts has a pleasure to invite you to the opening of the exhibition of finalists and the official announcement of the winner of the Oskár Čepan Award 2009.

Sandra Kusá – president of the committee: The committee of Oskár Čepan Award 2009 chose the finalists from forty-four applicants, and has coincided on the four names after an eight hour discussion. The international jury with the following members: Anna Daučíková (SK), Mira Keratová (SK), Sharon Kivland (GB, F), Sandra Kusá (SK, CZ) a Marek Pokorný (CZ), while two members could not participate - Vít Havránek (CZ) a Ilona Németh (SK), decided to choose artists, whose work raised questions and discussion, and offer new views differing from the trend. The members of the jury focused on the uncertainty of art, art which can uplift or disgust, surprise or disappoint, and finally delight or frighten. The jury decided to chose the four finalists, so that their presentation would be a challenge for the artists themselves, but the contemporary art scene too.

Sharon Kivland: The selection was not based on mediums, and indeed, this is evident from the four diverse practices of the artists. The term ‘practice’ perhaps best defines a paramount criterion for the selection, for each artist demonstrates a praxis, in the sense of a coded activity that transforms or modifies social bonds. In each individual practice there is a world, a world of actions or thoughts particular to each artist, which appears as itself, and to itself, and one that is both intra- and inter-subjective.

András Cséfalvay (1986, Bratislava) – The jury chose the young student of the Academy of Fine Arts and Design despite his low “professional” age, but surely not as a “wild card”. They appreciated the absolute consequent almost renaissance approach in his practice, which is presented firstly in his opera cycle the Fall of the Heroes. The author perceives opera, and analogically to that videoart, as a gesamtkunstwerk, in which all functions are fulfilled by the artist (he write his own music, sings, plays, directs, etc.) In spite of the serious form, the final videos combine irony, intelligent humor and unobtrusive intellectualism, everything achieved with full devotion, which is quite infrequent in our contemporary art. This absolute creative approach influenced the jury to challenge him to exhibit as a finalist. Tomáš Džadoň (1981, Poprad) – The absolvent of the Prague Art Academy was recognized primarily for his ability to create art for many senses. He creates objects, installations and situations appealing on the collective memory, common remembrances and the past. They seem to flirt with a form subservient sentiment, but the devoted concentrated program, intelligent reaction to space, and in situ realization make his works stand out from the mass of similar “jokes”. He is discussing the topic of the “Slovak reality” (folklore, society and political realities), which he treats substantially despite the nostalgic from, and makes an effort to find them a new place in the present situation. At the same time he tries to deprive the layers of trauma, which they are usually connected with.

Jarmila Džuppová (1984, Michalovce) – The painter, who comes from Eastern Slovakia, does not want to move from there, and wants to “exhibit at home, not here-and-there”, was chosen by the jury because her work stands out from the dominant current of contemporary painting. Her paintings, despite the formats, resemble more drawings, both formally and in the approach, they are more like diary entries then constructed “pieces”. At the same time the jury appreciates the consistent fixation on her own world (geographic, mental and visual), which does not slip into a pose, on the contrary, she almost stubbornly keeps “defending her own”. The collection of paintings balances on the border of banality or almost kitsch, a therapeutical diary, however at the same time something very deliberate can be felt, almost paganic sternness and silence.

Viktor Frešo (1974, Bratislava) – The visual artist whose work was condemned by all the members of the jury, was chosen as a finalist in spite of the all pejoratively valued characteristics of his practice, which were acknowledged, and discussed throughout- commonplaces, empty gestures, non-originality, and achievement of success through scandal. A long debate decided that it relevant to attest if the author is only a local symptom, an aggressive pose, or is able to defend other positions. The last finalist of the four is thus more “challenged” then “chosen” for the exhibiton.