Award with a new name 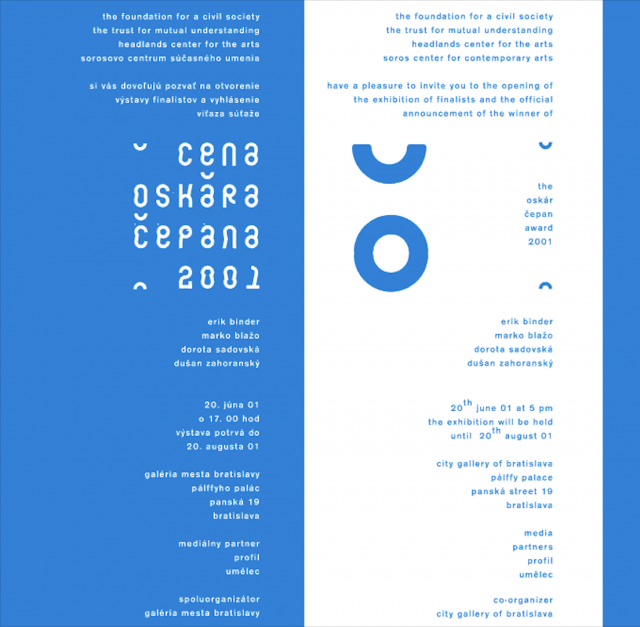 The Foundation For a Civil Society, The Trust For Mutual Understanding, Headlands Center For The Arts, Soros centre of contemporary art have the pleasure to invite you at the opening ceremony of the exhibition of the finalists and the official annoucement of the winner of The Oskár Čepan Award:

The winner will be awarded by the President of the Slovak Republic Rudolf Schuster.

The Oskár Čepán Award is a competition designed for young visual artists, which was initiated by Wendy W. Luers, the founder and director of The Foundation for a Civil Society, and established in 1996 as a parallel to the Jindřich Chalupecký Award in the Czech Republic. Since 2001 the competition has been bearing the name of the leading Slovak art theorist Oskár Čepan (1925 – 1992), who by his numerous studies on the visual arts considerably contributed to Slovak theoretical writings and artistic events. The competition is open to candidates under 35 years of age holding Slovak citizenship. They may present their work in painting, sculpture, graphics, drawing, installation, photography, multimedia and video art. The applied arts, theatre and film are not included. Visual artists may enter for the competition individually. In addition, art theorists may enter an artist for the competition on the basis of written consent. Each candidate is required to submit a completed application form with annexes and relevant visual documentation. The Oskár Čepán Award winner is decided by an expert commission made up of visual art theorists and visual artists appointed by the SCCA for a two-year term of office. The competition has two rounds. In the first round, the expert commission selects four finalists from all the entrants, of whom it nominates the winner in the second round. The second round takes place in the common exhibition of the four finalists who are required to present themselves by works of their choice. The winner is awarded a three-month creative sojourn in Headlands Center for the Arts in Sausalito, California, U.S. The last week of the sojourn is reserved for a visit to New York, where the winner will visit leading studios, galleries and museums. After return, the winner should present his/her works in a solo exhibition, conceived on the basis of the experience acquired during his/her stay in the U.S.

The winner of the Oskár Čepan Award for 2001 was Marko Blažo.

Marko Blažo For an exceptional poetry growing out of the tradition of conceptual art with a cross over to visualization attractive to viewers, as well as for a pronounced sense of a visual grasp of absurd situations, and a sense of wittiness and irony.

Dorota Sadovská For an original approach to the traditional medium of painting and a unique artistic program, which she has been systematically developing since the mid-1990s, also taking account of her participation in representative exhibitions at home and abroad.

Erik Binder For an inventive approach employed in exploring the border between ‘the high’ and ‘the low’ in art, and for a perfect sense of working with the found object and the ready-made, also taking account of his latest installations presented in exhibitions in the Löffler Museum in Košice and the Medium Gallery in Bratislava.

Dušan Zahoranský For systematic crossing over borders between individual art genres and media, and for the long-term and inventive employing of new media.