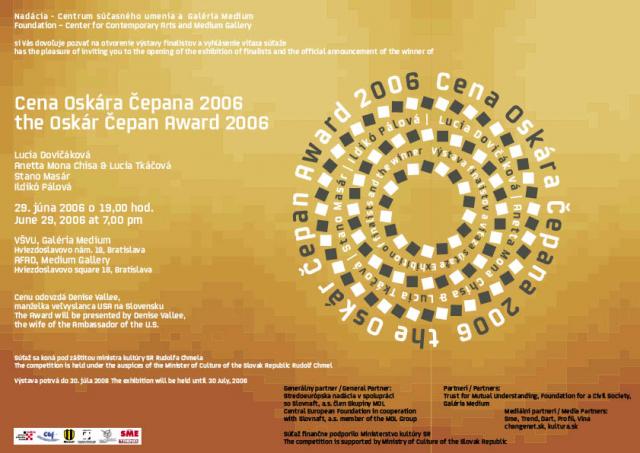 Foundation – Center for Contemporary Arts has a pleasure to invite you to the opening of the exhibition of finalists and the official announcement of the winner of the Oskár Čepan Award 2006.

“We have decided on the winner of 2006 Oskár Čepan Award on the basis of his/her existing work. At the same time we have considered the significance of his/her activity on both Slovak and international scenes.

As for the work of the couple of winners – Anetta Mona Chisa and Lucia Tkáčová – we have appreciated multilayered statements on current social issues and social stereotypes. Thematically they focus on the functioning of an artistic scene and careerism in this area, politics and sexuality, with all these fields being interconnected.

We have appreciated their artistic, and often ironic activism. Recently they have become important driving forces on the Slovak artistic scene.”

Winners Anetta Mona Chisa (1975) and Lucia Tkáčová (1977) graduated from the Academy of Fine Arts in Bratislava, Department of painting and other media (Prof. Daniel Fischer – A. M. Chisa, and Prof. Rudolf Sikora – L. Tkáčová). Their first common exhibition in 2001 was entitled Les amies. Since then they implemented several common projects, both artistic and curator, focused on reflection of current problems in visual arts. While their exhibitions A Room of Their Own, 2003 and Chlap, hrdina, duch, stroj, 2006 were focused on critical reflection on gender issues and their (re)interpretation through comments on gender stereotypes in contemporary arts, the series of videos, such as Late Night Video, Home Video, Seductive Verwertung, subverts certain communities, groupings, and positions of power. Based solely on aesthetic evaluation criteria they create new categories that marginalize and undermine traditionally steady positions of exclusively masculine, and later also more generally valid structures and local communities. Lucia Tkáčová and Anetta Mona Chisa focus on problems by means of which they can humorously and ironically disrupt stable securities in the cultural, social, geographic or historical context.

Finalist Stano Masár (1971) has established on the Slovak artistic scene due to his neo-conceptual attitude and intelligent humour, which is typical of his works. He likes to use, modify, and paraphrase discovered symbols. In the series of absurd furniture objects and installations he demonstrated the ability to work with space effectively and multilayerly. This time he attracted an attention by the series of pictograms wittily defining selected artworks of the world and Slovak art of the 20th century. He succeeded in interpreting the canon of art history through trivial form of tables – handwriting without a manuscript.

Finalist Lucia Dovičáková (1981, Košice) graduated from the Faculty of arts at the Technical University in Košice (Department of visual arts and intermedia). She is one of the most promising young talents on Slovak artistic scene. She is very successful in alternating more media. Depending on the subject she uses painting, photography, video, or animation. All works reflect author’s straight relation to visual reality. She has the ability to deal with “important” topics of current culture with personal involvement, and thus also bring unconventional solutions. Her work is characterised by sincerity and deliberate inelegance. She prefers humorous and sometimes even rough attitude towards private “partial” subjects as well as quotations and usurped contexts.

Finalist Ildikó Pálová (1982, Rimavská Sobota) graduated from the Faculty of Arts at the Technical University in Košice (Department of visual arts and intermedia, Atelier of contemporary painting). The series of paintings entitled Nemecké príbehy / German stories consists of solitary figural paintings that are expressive in terms of both colour and meaning. Her paintings are significantly influenced by her personal experience of violence against women during her stay in Germany. Author’s stories, intimate art-therapeutic statement, child sincerity as well as artistic spontaneity impart an authentic expression to her works. The author expresses own personal experience from travels confronted with life in Slovakia – the series England / Slovakia / Germany – through compositional solutions and genres, such as portrait, self-portrait, landscape and author’s text.